skip to main | skip to sidebar

As a follow-up to my last two posts, featuring the new error map compensation for SMA/NWT/D6/LTDZ devices, I decided to create the same error map with my Siglent SSA3000X.

Using the built-in TG, I connected the TG SOURCE to the INPUT of the switchable attenuator and from its OUTPUT back into the RF INPUT of the Siglent.

The attenuator costs around 60 Euro at eBay and looks like this: 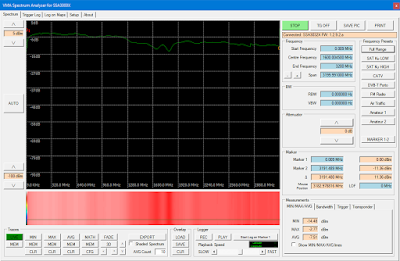 Recording the first trace at 0dBm - no attenuation.

Then I united each exported trace into an error map file using the "VMA Simple Spectrum Analyser for SMA/NWT/D6/LTDZ". This is possible because all versions of my software produce compatible files when exporting traces. 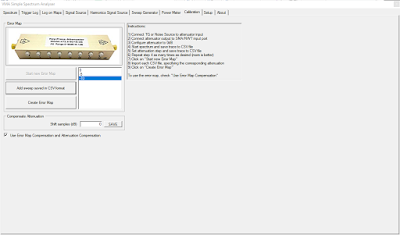 Using the new Calibration tab of the version for SMA/NWT/D6/LTDZ devices, I generated the Error Map file, which basically joins all exported traces into one single map.

The result is a CSV file that can be read into Excel and which contains each trace in a separte column, with the first column showing the respective frequencies (9kHz up to 3.2GHz). 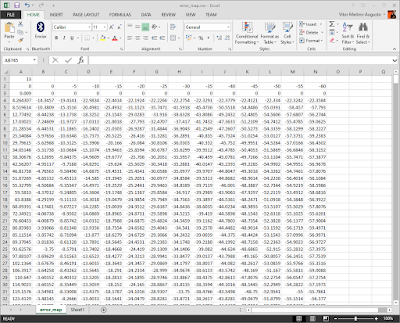 The TG function of the Siglent SSA3000X can use Normalization. What this does is to compensate the TG signal, so that it matches the set TG Level (in this case I set that to 0dBm).

Here are the results: 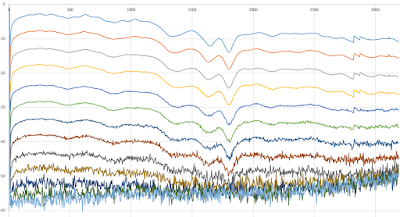 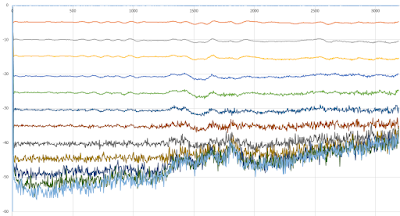 As a comparison, here are the equivalent results produced by the D6, using the latest version of my software: 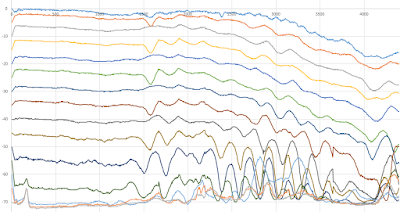 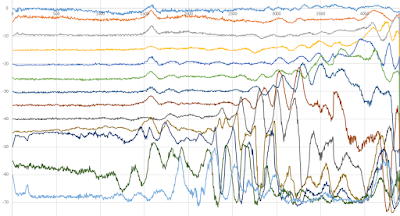 
Note that "Normalization" is called "Error Map Compensation" in my software!

It amazes me how much performance can be extracted from cheap devices as the NWT and D6!

I just released a new version of my software (Version 2019-08-30) with improved algorithm for the error mapping.

I fixed some bugs and added support to save calibration settings in the Registry.

This is what the error map looks like as a graph made with Excel:

As can be clearly seen, some reagions of the graph have overlapping curves. In this reagion, my error map compensation algorithm will have no way to apply the correct attenuation.

The graph shows the actual error map: the first point is the correct power level for each trace (0dB, -5dB, -10dB, etc.). The algorithm will extract from each trace the respective correction value.

Creating an error map is really easy and quick, but requires a mean to provide calibrated input signal at each power level over the whole frequency range that is to be calibrated.

You can choose if you want to export each trace as LIVE, MIN, MAX, AVG or MATH (only Live and AVG make sense, though).

Another new feature is the external attenuation correction: you can specify a value that shifts the trace up or down, according to the dB value inserted. This should be interesting for those that modified the D6 device for improved performance and now have a +10dB to high reading.

Here are some examples of the benefits of using the error map compensation: 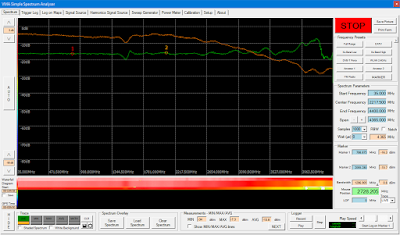 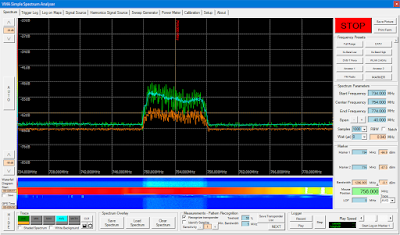 Please test this new functionality and let me know about your results in the comments.

I just uploaded a new version of my software for the SMA/NWT/D6/LTFZ devices, featuring calibration and error map compensation! 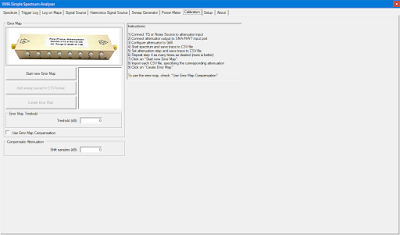 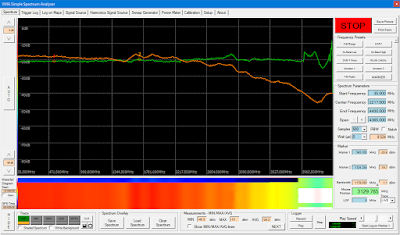 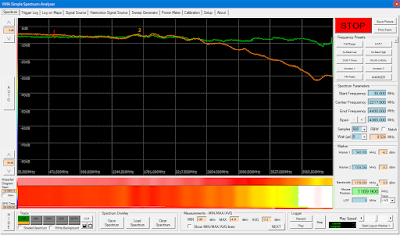 In order to create the required error map, a signal source producing a 0dBm trace is required.

Then, several attenuation steps are applied, in order to measure the respective trace as measured with the SMA/NWT/D6/LTFZ device.

It is recommended to use a "Key-Press Attenuator" like this one:

The error map is a CSV file that can be opened and edited in Excel. In theory, you could manually create an error map, using calibrated professional signal generator: 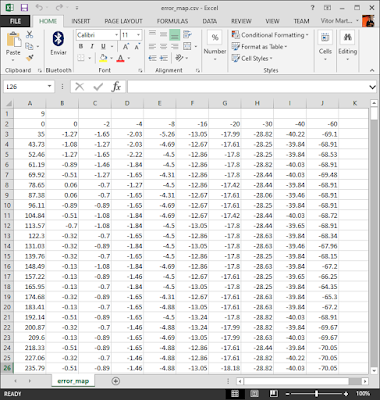 Hope you like this new feature, which potentially adds a new level of precision to the cheap SMA/NWT/D6/LTFZ devices.

Please note that this functionality is still under development and I am not sure about the results that can be obtained!

This is the "new" version, that comes with a metallic case: 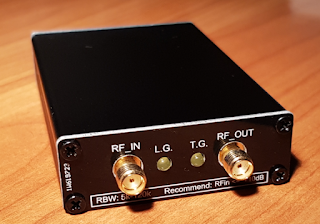 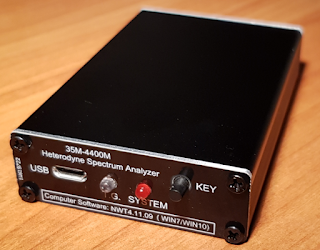 And indeed it did not work with my software, as many of you told me.

After some analysis, I figured out the issue: this particular device uses the "a" command instead of the "x" command. The difference, as explained in the LinNWT manual is:


As of firmware version 1.14 there are new commands:"a": This command is similar to the "x" command, but in this case a time value in microseconds is specified for a pause between each measurement.

The original SMA/NWT devices work fine with the "x" command, but this LTDZ device does not recognize the "x" command and only works with the newer "a" command. But that is not all: I found out that the pause needs to be at least 10 microseconds, otherwise the device will hang.

So I added the required settings to the latest version of my software, which you can download here.

When you configure this device in the setup tab as shown in this picture:

the minimum pause of 10 microseconds will be considered, even if the Wait ComboBox in the Spectrum tab shows "0 us": 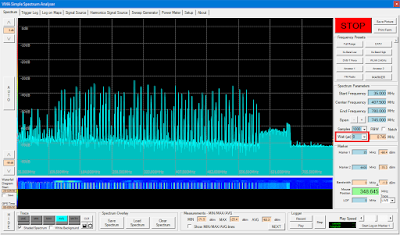 The spectrum shows my CATV spectrum composed of 60 analogue channels and 9 DVB-T transponders.

Selecting a higher Wait period did not produce any noticable differences.

Because values higher than 90 microseconds traditionally ended up hanging both my software and the device, I replaced the preconfigured pause times to more reasonable values.


So what do I think of the LTDZ?

Well, performance is even worse than the unmodified D6 JTGP-1033!

The background noise at -70dBm is similar to the D6 JTGP-1033, but the sensitivity is really bad.

This device cannot be used for radio DX or satellite DX, as the signals are normally at -60dBm and as such almost invisible to the LTDZ. 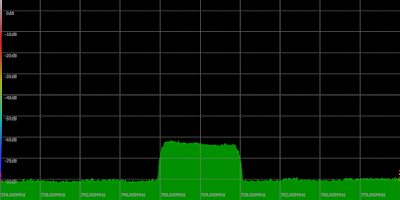 SMA/NWT:Noise floor is -80dBm and sensitivy is good.
The DVB-T transponder can be seen clearly and measurements are can easily be done. 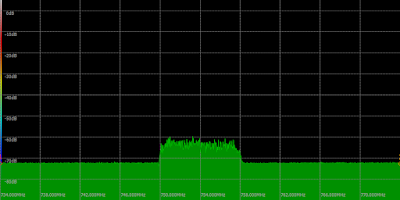 Unmodified D6 JTGP-1033:
Noise floor is -70dBm and sensitivy is worse.
The DVB-T transponder can still be seen, but measurements can only be carried out using the Average trace, as there is too much noise on the Live trace. 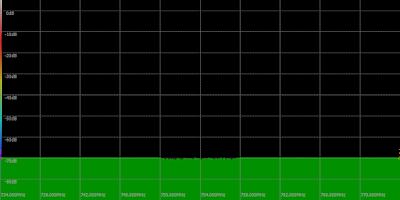 LTDZ:Noise floor is -80dBm and sensitivy is really bad.
The DVB-T transponder practically cannot be destinguished anymore, except for some additional noise where the transponder should be shown. Impossible to measurements on this transponder.

My software does now support this device, but please bear in mind that the quality of the LTDZ is directly proportional to the money it costs!

Unless you want to measure signals above -60dBm, do yourself a favour and buy a SMA or NWT device from BG7TBL. The refresh rate is a bit slower, but at least you will be able to do proper measurments.

I purchased a USB GPS receiver at AliExpress for around 8 Euro (with free shipping): 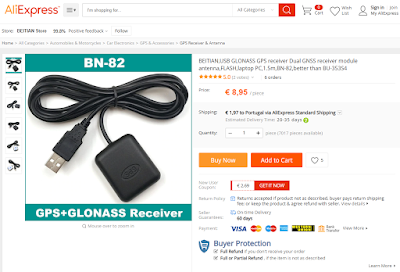 This receiver supports GPS & GLONASS and works quite well.

I got it to measure time and for some GPS developments.

But I did not find a suitable tool to test if the receiver was working correctly! Apart from LadyHeather (http://www.ke5fx.com/heather/readme.htm), all tools I could find either were not freeware, did not support GLONASS or were too complicated.

Note that LadyHeather is a great tool for disciplined frequency standards (think Rubidium standards), but while it does support this receiver, it is just a bit too much for this simple GPS receiver.

Anyway, I put my hands on the keyboard and hacked together a small tool that fits my needs:

(NOTE: The red fields are simple cover-ups of my geolocation)

The tool only shows the GPS time without any time zone correction!

The main goal of the tool is to show that the GPS receiver is working...

The source code uses the same algorithm that is incorporated in my VMA Simple Spectrum Analyzer software and it has been enhanced to support GLONASS.

I was pointed to this new NWT clone, available at Banggood: 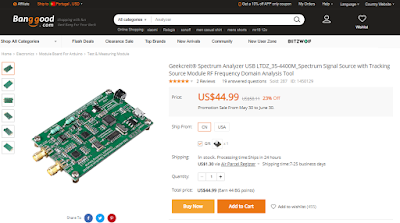 What one can notice immediatly is the very competitive price of just 40 Euro/45 US$. This is an amazing price for a device featuring two ADF4351, allowing simultaneous TG functionality.

But, there is always a catch...

While the device is reported to work correctly with WinNWT/LinNWT, it does currently NOT work with my VMA Simple Spectrum Analyser software.

I had the same issue with another NWT clone, called "D6". This board did originally not work with my software, either. I had to implement an alternative algorithm to support it. The reason was a not 100% correct firmware implementation, compared to the original SMA/NWT devices.

My guess is that once again, this new board has some firmware issues. More precisely, because my software is optimized for speed and a fast spectrum refresh rate: when it expects to receive for instance 500 samples, it will really expect that those 500 samples are sent! If the device only sends 499 samples back (i.e. due to some rounding error), then my software freezes.

I know - this sucks!

But without such a device in my hands, there is not much I can do at the moment.

I am considering buying one, just to support it - but that would take at least one month, just for the device to get here. And that is if I decide to go for it, at all...

Why have I not bought this device right away? Well, I do fear that we will see more and more of these clones, each competing for an even lower price. The D6 already had a poor performance compared to the SMA/NWT devices...

Also, in one of the Q&A on the Banggood page, it says that a new device with case will be launched, soon. I ask myself: will they update the firmware? Should I wait for this new version?

I can't possibly buy ALL similar devices, but I am doing my best here...

If someone has information about flashing the firmware, SDK of the firmware (like it is available for the D6), etc., please get in touch.

I just ordered the new model from Banggood. It has a slightly different PCB layout and comes with a metallic case and status LED's.

This is the link:
https://www.banggood.com/Geekcreit-Spectrum-Analyzer-USB-LTDZ-35-4400M-Signal-Source-with-Tracking-Source-Module-RF-Frequency-Domain-Analysis-Tool-With-Aluminum-Shell-p-1494125.html

Note: This board is currently NOT compatible with my software - but I ordered it to see if I can make it compatible. Wish me luck and stay tuned...

I am selling my house and thought that some of the readers of my blog might actually consider moving to Portugal... 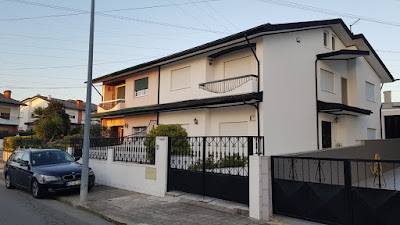 Here is the a link to all the information:

It is discrete from the outside, but offers much space and even has a small gym with finish sauna.

The house is in a very quiet neighbourhood and can be left closed for long periods of time - ideal if you want to live half a year in Porto and half a year somewhere else.

Oh... Internet and cable TV is available with the latest technology (up to 1GBit/s).